Boerhaave's syndrome in an ultramarathoner

At the 2018 Western States 100 mile race we encountered a runner who presented to the medical aid station at mile 70.   The runner was on his goal pace but had been noticing that the color of his urine had changed from clear to “copper colored.”   He denied any severe muscle pain and was running well.  This urine color began changing around mile 30 and then fluctuated for a while before getting worse between mile 65-70.  He also had not had any nausea or vomiting during the race.   He had taken some non-steroidal anti-inflammatories around mile 62  for foot and ankle pain he had for about 40 miles.  .   He was well ahead of the cutoff at the aid station.

Because of his symptoms, we elected to do an I-stat on a venous sample.

After consultation with the race director, we discussed the risks of him continuing and warning signs.   He was instructed to back off his pace a bit, hydrate and not take any more anti-inflammatories.    He was also instructed to recheck in at the medical tent at the finish for re-evaluation.

He “fast-walked” with some mild running from mile 70-95.   At mile 95 he started running again with no problems.  Upon finishing, we performed another i-stat.

This is the first time we have seen a runner with acute renal injury as documented by i-stat testing continue with a race and show improvement in renal function while continuing with the race.    The treatment plan of increasing hydration, backing off of exertion and avoiding NSAIDS allowed him to finish while his renal function improved.   Despite the elevated BUN/Cr levels, the runner was looking good and didn’t seem in any medical distress.

Teaching points:
1) Runners with mild renal failure can continue to safely run a race given proper instructions
2) Having an i-stat available  did give us the ability to more accurately determine the extent of the runners kidney injury
3) In cases where there are no clear guidelines, having an honest discussion with  athletes of the risk/benefits of continuing the race can help the runner meet their goals.  In this case, we were fortunate that the runner was honest with the medical staff and trusted our advice.  In return, we also wanted to do what we could to help the runner continue so they could achieve a race finish.
Posted by AndrewPasternak at 1:26 PM 2 comments:

A 55-year-old male runner was competing in the Tahoe 200 miler race.  Approximately 60 miles into the race he was running through a dust cloud at night which resulted in poor ground visibility.   Because of the decreased visibility, he took a “strange step” and felt a twinge in his left leg.    Soon after he noted a rash on the leg, which he attributed to friction from his gaiters.  At mile 62, he stopped to do some blister care.   At mile 72, he reexamined the rash and noted it was spreading.

In the next 16 miles be began having increasing pain with ankle planar flexion and tried to duct tape his leg.   When he arrived at the aid station, medical staff evaluated him.  It was recommended that he be evaluated at the hospital before continuing, as it was 20 miles to the next aid station.

Exam: Upon arrival at the local hospital, he had an 8 x 27 cm area of redness over his leg with firmness over the anterior and lateral compartments.   He was also noted to have severe pain with dorsiflexion and ROM of his toes in the anterior/lateral aspect of his leg.   Dorsalis pedis and posterior tibial pulses were noted to be normal as was capillary refill.     Lab testing revealed a WBC count of 11.9 (mildly elevated) with a CPK level of 1323 and a C-reactive protein of 1323.   Compartment pressures were not obtained

Treatment/Disposition: The runner was diagnosed with cellulitis with acute compartment syndrome based on his clinical presentation.    A fasciotomy was performed to open the anterior and lateral compartments and he was started on IV antibiotics.   He was put on three weeks of bed rest and then started increasing physical activity. He was back running/walking 3 months later.  Nine months after surgery he finished the Tahoe Rim Trail 100 miler and returned to complete the Tahoe 200 in 2016.

Take Home Points:
Acute Compartment Syndrome presents with “pain out of proportion” to the apparent injury.   Patients describe a deep ache/burning pain not relieved with rest along with paresthesias.  Exam findings include pain with passive stretch of the muscles, “wood-like” feel to the compartments on exam, decreased sensation, and muscle weakness.  Pulses/pallor may not necessarily be compromised.   Obtaining compartment pressures is helpful but not necessary to make the diagnosis.  If compartment pressures are obtained, fasciotomy is indicated if the ACS pressure is 30 or less (ACS pressure is calculated by the diastolic BP-compartment pressure). 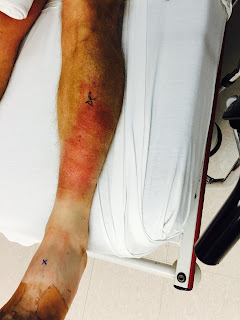 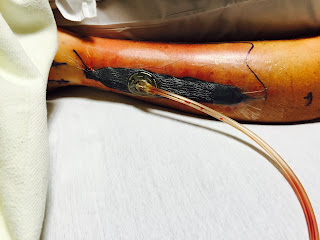 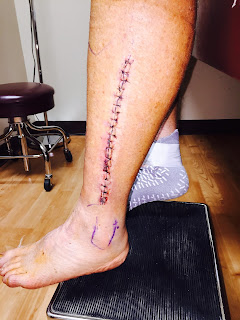 Posted by AndrewPasternak at 8:02 PM No comments:

CASE REPORT:
History:  62 year old male runner with no significant medical history and not on any current medications.   The athlete was competing in a 50 mile race.  He is an experienced endurance runner having raced for over 30 years.   He lives at sea level and was running at altitude (6000-8000 feet).
Approximately mile 18  of the race, he ate half of a sandwich and cookies at our aid station.  About 1 mile later, he developed epigastric abdominal pain/lower chest pain.   He had a normal bowel movement with no blood or diarrhea.  He did force himself to vomit with no relief.    Because of pain radiating to his shoulder, he did take an aspirin that he had with him.  He walked back to our aid station under his own power

Exam:   The runner was in moderate discomfort upon presentation to the medical tent.    He rated his pain as 7/10 in severity over his epigastric area and had pain radiating to his right shoulder.  Vital signs with a oral temperature of 97.8 F, BP 120/78 and pulse of 65 BPM.   On physical exam, he did have diffuse abdominal guarding but no rebound tenderness and no masses.

Treatment/Disposition:  The runner had already taken 325 mg of aspirin prior to presenting to the medical tent.  He was given some calcium carbonate tabs for his pain which provided no relief.    After discussion with the runner, he was driven to the closest emergency room (approximately 30 minutes away by truck over forest roads) with one of the treating physicians.

Follow up care: Upon arrival at the emergency room, his pain had increased to 8/10 in severity.   He was given dilaudid, ondansetron, and nitroglycerine .    Labs revealed an elevated WBC count of 15.7 with a left shift.  His stool was heme positive.  Troponin was mildly elevated at 0.13 ng/mL (0.00-0.05 range) as was serum amylase at 186 (23-125).  LFTs were normal.   ECG showed no evidence of ischemic changes.  CT of the abdomen/pelvis did show a mildly distended gallbladder with a thickened wall and pericholecystic fluid.   The runner was transferred to another hospital and had laparoscopic cholecystectomy performed.  Pathology did reveal of acute gangrenous acalculous cholecystitis.  He was discharged one day later and continued to improve.
Take Home Points:
1) While abdominal pain is very common in runners, acute cholecystitis in an athlete has not been reported often in the medical literature.
2)  Based on the symptoms and history alone, it was initially difficult to rule out cardiac causes for his pain.   His physical exam findings, however,  made us more concerned for GI issues which, in turn, allowed us to transport him by ground as opposed to helicopter.
3)  Heme positive stools are fairly common after long exertion (8-85% of athletes).

Posted by AndrewPasternak at 9:41 AM No comments: 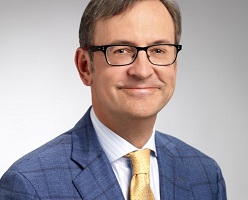 To submit a case report, please email to ultrasportsscience@gmail.com.